Somewhere along the way, either before we left the US or as soon as we arrived in Thailand, someone told us that the sneaky thing about it all was that when culture shock hit, we wouldn’t even know it. How, I wondered, can one not know, in the midst of such life-upheaving, gut-turning transition that she is experiencing culture shock?!

I have some evidences:

But it’s never been about culture shock.

I simply did not look at this culture and say, “I’m shocked!” (except when driving initially, house-hunting, and buying our kitchen table).

I resounded more closely with the phrase “transition-shock” that another new-to-Thailand friend coined. Yes, I thought, transition is hard work. Settling in is happening more  S  L  O  W  L  Y   than I would have previously imagined.

Then, on our way to dinner last night (a glorious date I set up whole days before Brenden returned from Myanmar), I almost lost it. That can’t-live-with-it/can’t-live-without-it app called Google Maps decided, once again, that it would not be my friend.

Google Maps, who has frozen up on me and side-lined me to the berm of the highway the few times I’ve driven by myself to new locations at night, putting me in foul moods when I should have been excited to meet a girlfriend for coffee or eager to visit the migrant workers our agency serves. At one point prior, Brenden and I had synced our phones while driving, so that the near-instantaneous echo of the Google Maps Lady coming out of both of our phones, and the tracker that moved forward steadily and accurately on both of our phones, were sweeter evidences of God’s mercies than anything else I’d experienced that day (week?).

But last night, try as we might, she wouldn’t cooperate with me, and we spent many precious minutes of our date comparing settings on our phones and trying to bring me down from RED, because the implications are that it is certainly difficult to be independent and mobile without that tool to help get me around this large city, as I’m directionally challenged and unable to read Thai (signs) yet. I felt helpless in that moment. We thought we had fixed the problem. Two steps forward, one step back. Again.

Conversation flowed into other impasses that felt heavy and impending, and in the beauty of free-flowing conversation, the kind with no agenda to even understand or fix but rather to just cleanse, we did find some understanding.

And its name is culture shock.

It’s that when there are technological problems, I don’t have my go-tos for help. It’s the guilt of having modern-day amenities like technology or having a safe and comfortable home here, knowing other cross-cultural workers’ standards of living across the world are much more rudimentary or unsafe, not to mention the people we came here to serve. It’s that buying household items looks differently than it does in the States (often with a 2-week delivery delay and even more importantly–no CraigsList), and furniture costs more too, than what we’d have typically chosen to pay, forcing a redefinition of our values and a letting-go of what we thought something was “worth”, based on a new reality of prices.

One of the ways culture shock rubs (me) is that the ways we’ve always known of doing things, of accomplishing tasks, of finding forward motion, they’ve changed. And the more subtle or covert this change is, the harder it is to identify. This is the case living in Chiang Mai, which can feel so Western and have so many modern amenities, while still being a developing country. If our family were living and working in a part of the world that had no access to smart phone directions, for example, my expectations and daily strategies for driving would look very different.

Thankfully, I’ve had wise friends assure me that these stack-upon-stack of stressors are all within the scope of a cross-cultural worker’s first term. That they culminate in a variety of wearisome emotions that are hard to identify as cultural adjustment, and that the first steps in coping are recognition and then acceptance of the process.

As my mother-in-law once said: “How do you eat an elephant?” “One bite at a time.”

So over the next few days as I post pictures of all the beauty we’ve experienced over the past month, know that it’s happening alongside some gritty, growing, stretching times too. It all melds into one big, sticky, messy, beautiful, wouldn’t-want-to-be-anywhere-else kind of life. So here’s to the next 100 days and what they will hold.

love you all,
becca

PS: Brenden arrived home safe and sound. The squeals from these kids as they ran to him–incredible. (More on his trip soon.) 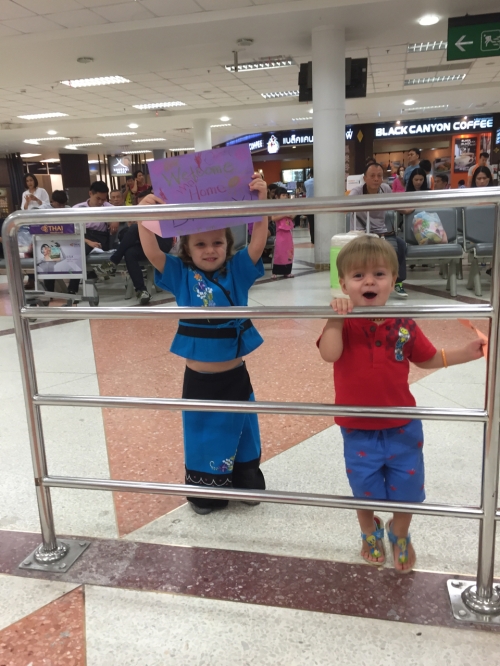